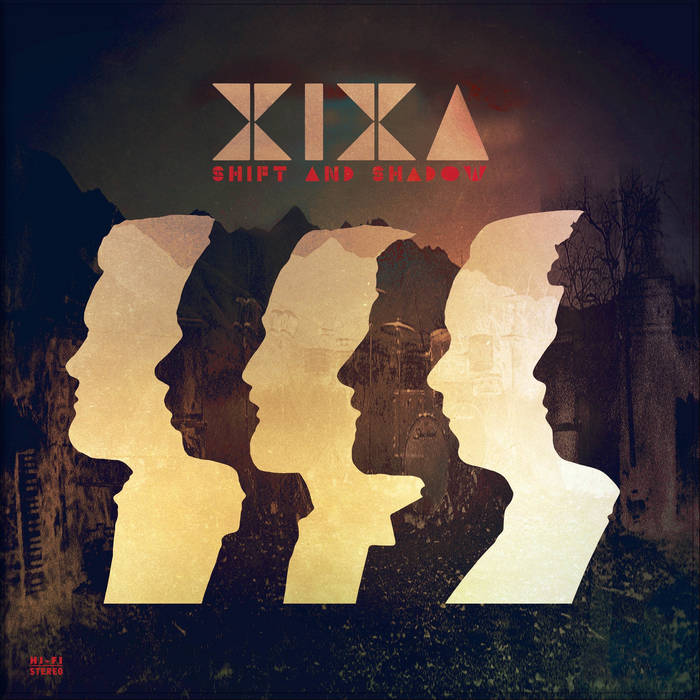 “Every time we’d play a chicha song, it would steal the show,” exclaims Gabe Sullivan of Tucson’s XIXA, a devotee of the guitar driven, psychedelic sound born in the Peruvian Amazon. “People would mob us after the show, wanting to know the name of that one song. It was always the chicha cover.”

So the indie and punk rock road warriors started their own chicha cover band, a sextet that rarely rehearsed but found a wild ability to pound out hours-long sets. The band took off, without the usual scraping, bickering, or van-sleeping the members had endured with projects past.

Shift and Shadow, the band’s debut EP (Barbès Records; release: November 13, 2015) shows this easy alchemy, blurring rock, punk, synth-pop, Afro-Latin rhythms, and Amazonian riffs in a north-south feedback loop. “It’s weird. It’s effortless,” states Brian. “I don’t know if it’s our backgrounds, with just enough Latin, just enough rock. Alchemy makes it meld. We never sat down in a room and said, ‘We need to sound like this.’ It’s not contrived. When we started playing chicha covers, we learned songs inside and out, and at some point that filters into your original music.”

Brian was in spitting distance of indie stardom with his band Mostly Bears. Gabriel hit the road with metal and punk bands in his mid-teens, but over the years he found himself fascinated with everything from Howling Wolf and Townes Van Zandt—“They made the most punk music imaginable”—to Prado Perez Perez Prado and Balkan brass music(Gabriel founded his own Balkanesque band, Taraf de Tucson). They both worked with Giant Sand and Calexico, when not pursuing their own solo songwriting. And they both moonlighted with Sergio Mendoza y la Orkesta, falling hard for cumbia and mambo. Then they discovered chicha, and when they saw how fans clicked with the covers, they decided to launch a band that did nothing but.

It felt like a peculiar homecoming. Both Gabriel and Brian, like many young artists in Tucson, are second- or third-generation Latino. Though they never went in search of this identity, it found them in chicha. They felt how that music, those rhythms had always been there.

“All these beats and rhythms are in your brain your whole life, so they make a lot of sense when you start playing them,” reflects Brian. “Latin music is part of Tucson’s sonic landscape.” Only forty miles from the border, the city’s laidback vibe and Mexican communities nurture everything from strong singer-songwriter and hardcore scenes to great cumbia bands playing at out-of-the-way Mexican steak houses on the south side of town. Latin music is everywhere.

“Until you dive into Latin music, you don’t know if you have a strong sensibility for it,” Brian continues. “I grew up speaking English, but went to bilingual dances, was part of a folkloric group, your typical second or third-generation Latino family. My grandparents didn’t want my parents to speak Spanish, or to be Latino. Now, for our generation, it’s almost imperative to speak Spanish, even if you have to go to Barcelona or elsewhere to really learn it.”

They learned to speak chicha fluently, gathering musicians from the Tucson scene to form Chicha Dust, eventually growing to a sextet. “Winston played for Alice Cooper in the 90s. Efren ONLY knows Latin music, and didn’t know Led Zeppelin,” notes Brian. “You put them together,” that core combination of hard rock drums and Efren’s timbales, “and it’s XIXA.”

Without trying too hard, they began to write originals, somehow getting six players on the same creative page with remarkably little stress. “We’ve never had moments when we weren’t sure what to do with our sound,” Gabriel explains.

The effort comes in the studio, a recording space the band members built themselves. They will play with a track until it sounds right. “We come from that indie rock DIY mentality. You sleep in your van. You steal food from big box stores because you’re broke. You scrape together the money to record in a couple of hours,” says Brian. “We’ve come so far, and we realized we could build a studio, record our own songs, and not be satisfied with just anything. We could rearrange our songs until it’s right.”

The cumbia beat sneaks in everywhere, even covers like The Meat Puppets’ “Plateau.” “I was listening to Nirvana’s Unplugged set, and that song came on,” Brian remembers. “The song was perfect for us. The Meat Puppets are from Phoenix, very Southwestern, with that desert mystic feel. I kept hearing this classic cumbia beat behind it, and I suggested we record it and see what happened. The band thought I was crazy, but we just did it.”

“It’s so natural; it’s very strange to me that we haven’t been doing this longer,” muses Brian. “We don’t have to try to make something more rock or to incorporate cumbia into it. It’s just I think what each person brings to the table comes out in this blend of rock, cumbia, chicha. There’s no effort involved.”